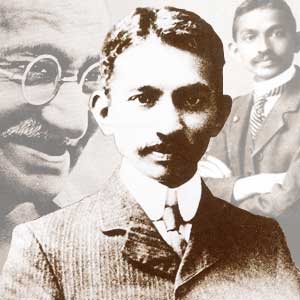 - Born in Porbandar, in western

called Vaisnavism whose chief tenets are nonviolence and the belief that

everything in the universe is eternal. His schooling and grades were mediocre.

and sacrifice. He married at age 13.

1887 - Joined . He jumped at the opportunity to go to to study even though it was considered a violation of the Hindu religion.

1888-1891 - Studied in, , concentrating more on personal and moral issues than academics. His unusual vegetarian way of life became a strong conviction for him despite and in spite of others' disagreement.

1889 - 1890 - Introduced to H P Blavatsky and Annie Besant of the Theosophical Society in but declined to become a regular member of the Society. However, during the following year Society influence led him to read Theosophical and religious literature including Edwin Arnold's The Song Celestial (the Bhagavad Gita) and The Light of Asia.

that his law degree was not considered of too much value. He accepted a mediocre year-long contract with an Indian firm in .

1891-96 - In , he was treated horribly and constantly humiliated for

being lndian. Gandhi would not accept the injustice as part of the natural or

man. He became quite a proficient political campaigner.

Legislative Assembly that would have deprived Indians of the right to vote. In

response, he founded the Natal Indian Congress and worked to expose the

discriminations practiced against the Indian population.

the Indian people and the prominent leaders to return to with him.

him upon his return.

1899 - At the outbreak of the Boer War, Gandhi organized an ambulance corps of 1,100 volunteers, arguing that Indians who claimed British citizenship rights

were also obligated to fight with the crown.

1906 - After the British victory, the government passed a ordinance

for the registration of the Indian population. Gandhi organized a mass protest

ordinance and to suffer all the penalties which came from their defiance.

1913-14 - Gandiii negotiated an agreement with General Jan Christian Smuts which ended the seven-year-long struggle against the ordinance. Hundreds had gone to jail in protest, and thousands had struck work, facing terrible repression.

Gandhi had frequent stays in jail, during one of which he made a pair of sandals

for Smuts. When Gandhi left for in 1914, Smuts wrote a friend, "The saint

has left our shores; I hope forever."

1915-19 - A time of relative inactivity. Gandhi helped recruit soldiers for the

lndian Army, though at the same time he criticized British officials for their

treatment of the Indian peasantry. In 1919 after the passage of bills that

allowed for the imprisonment of Indians suspected of sedition without trial,

Gandhi announced a satyagraha struggle. This shook the continent.

spiritual imperfections of the Indians themselves. The program of non-violent

noncooperation included strikes and boycotts of British manufactured goods. In

1922, Gandhi decided to call off the action after outbreaks of violence. He was

arrested and sentenced to six years for sedition. Released after an operation

for appendicitis, Gandhi found that suspicion had grown between Hindu and Muslim factions. He conducted a three week fast to encourage people to follow the path of non-violence.

1930-32 - After a period of relative inactivity, Gandhi began a satyagraha

campaign to protest the tax on salt. The action resulted in imprisonment of over

Conference in to presumably discuss Indian independence. Gandhi returned to to find new measures taken against Indian nationalists. He was arrested and while in prison began a fast to protest against a decision by the British authorities to segregate the untouchables. This created an emotional upheaval in the country.

that his followers had adopted nonviolence only as a political tactic. He began

to concentrate on rebuilding from the "bottom-up" by promoting social

programs that emphasized cottage industries and a style of communal living,

education he felt more suited to the peasant population.

1942-47 - In the last phase of British rule, Gandhi was once again politically

active in demanding for the immediate withdrawal of British colonialists. The

government responded by imprisoning the entire Indian Congress. With the victory of the British Labour Party in 1945, new negotiations ensued which ended in the plan of 1947 to create two new dominions of and . Gandhi felt this was one of the great disappointments of his life. Violence erupted between Muslims and Hindus which Gandhi protested through fasts. These succeeded in stopping the rioting in and helped force the city of into a communal truce.

January, 1948 - While on his way to an evening prayer meeting, Gandhi was