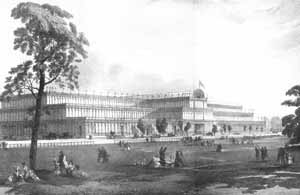 The Great Exhibition at the

In 1851 was arguably the leader of the  industrial revolution and feeling very secure in that ideal. The Great Exhibition of 1851 in was conceived to symbolize this industrial, military and economic superiority of .  Just representing the feats of Britain itself would have excluded many of the technological achievements pioneered by the British in its many colonies and protectorates, so it was decided to make the exhibit truly international with invitations being extended to almost all of the colonized world.

The British also felt that it was important to show their achievements right alongside those of "less civilized" countries. The prevailing attitude in at the time was ripe for the somewhat arrogant parading of accomplishments. Many felt secure, economically and politically, and Queen was eager to reinforce the feeling of contentment with her reign. It was during the mid-1850s that the word "Victorian" began to be employed to express a new self-consciousness, both in relation to the nation and to the period through which it was passing.

The exhibition was also a  triumph for 's German husband, Albert, whom she had married in 1840. Despite outbursts of opposition to Albert by the press the family life of the Victorian court began to be considered increasingly as a model for the whole country. Albert had appreciated the

achievements of Prime Minister Robert Peel's political and military advances and publicly advocated the advancement of industry and science.

These facts began to sway opinion in his favor as respectable foundations of family life and industrial supremacy were becoming rapidly acquainted with the monarchy of Victoria and Albert.  Conceived by , the Great Exhibition was held in in in the specially constructed . The was originally designed by Sir Joseph Paxton in only 10 days and was a huge iron goliath with over a million feet of glass. It was important that the building used to showcase these achievements be grandiose and innovative.

Over 13,000 exhibits were displayed and viewed by over 6,200,000 visitors to the exhibition. The millions of visitors that journeyed to the Great Exhibition of 1851 marveled at the industrial revolution that was propelling into the greatest power of the time. Among the 13,000 exhibits from all around the world were the Jacquard loom, an envelope machine, tools, kitchen appliances, steel-making displays and a reaping machine from the . The objects on display came from all parts of the world, including and the countries with recent white settlements, such as and , that constituted the new empire. Many of the visitors who flocked to came from European cities. The profits from the event

allowed for the foundation of public works such as the Albert Hall, the , the and the and Albert

This "bigger and better" building was divided into a series of courts depicting the history of art and architecture from ancient through  the Renaissance, as well as exhibits from industry and the natural world.

housed a circus and was the scene of daring feats by world famous acts such as the tightrope walker Blondin. National exhibitions were also staged within its glass and iron walls, including the world's first aeronautical exhibition (held in 1868) and the first national motor show, plus cat shows, dog shows, pigeon shows, honey, flower and other shows.

The itself was almost outshone by the park in which it stood, which contained a magnificent series of fountains, comprising almost 12,000 individual jets. The largest of these threw water to a height of 250ft. Some 120,000 gallons of water flowed through the system when it was in full play.

The park also contained unrivaled collections of statues, many of which were copies of great works from around the world, and a geological display

which included a replica lead mine and the first attempts anywhere in the world to portray life-size restorations of extinct animals, including dinosaurs. park was also the scene of spectacular Brock's fireworks displays.

After the Great Exhibition closed, the was moved to Sydenham Hill in and reconstructed in what was, in effect, a 200 acre Victorian theme park. The new Palace park at Sydenham was opened by Queen on June 10th, 1854.

A new structure for the

as Theosophy Cardiff separates from the

Esoteric Teachers  The Constitution of Man  The Planetary Chain

The Human Tide-Wave  The Progress of Humanity