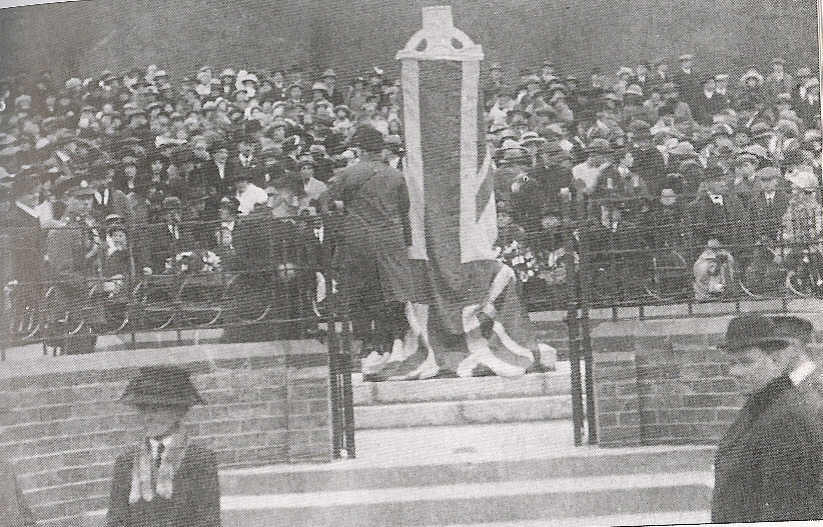 The memorial was dedicated on by

was awarded the Military Cross. during WW1.

IN spite of all that is going on, we ought to recognise with pleasure and gratitude that, although Britain is at war with those countries, the bond of the Theosophical Society is strong enough to make them wish to tell us how they are going on, and that the tie of human brotherhood is not broken because one or other nation may be at war.

I look to the Theosophical Society in the future to bind up the wounds which are caused by this terrible, fratricidal war. When the war is over, I hope the influence of the Society in the various countries may draw the nations again more nearly together, and sure I am that no Theo­sophist will allow for one moment any feeling of hatred to enter into his heart against any nation. It is, remember also, your duty to recognise the ideals which are separating the two, and to throw the whole of your thought and energy into those ideals for which we must ever stand - of justice to small states, of public faith, of public honour, and the recognition of international treaty obligations; and it is our duty to do that, because the whole future of the world depends upon the word of a nation becoming a matter of honour to the nation as well as to the individual.

Treaties and international obligations are only useful in time of war. When nations are fighting, then only is it that these things and other matters of civilised warfare come up. If they are to be thrown aside in war, then it is use­less to make them, and we are falling back into barbarism. So that I would ask you to remember the teaching of the Bhagavad-Gita; to remember what Shri Krishna said about war; to remember that while war may right­eously be waged for an ideal, or in discharge of a duty, there must be no feelings of hatred, no feelings of revenge, no feelings of antagon­ism against the enemies as such, only against the principles that they may for the time embody: "So fighting, thou shalt not commit sin".

And it is for all members of the Society to show that love may be kept pure and true, even in the midst of slaughter and misery, so that we may perform at once our duty to our respective countries and also to humanity. ­Extract from the Presidential Address to the Theosophical Society delivered at Adyar, .