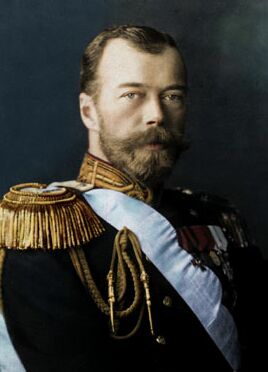 Tzar Nicholas II Drops in on

At the insistence of H.P. Blavatsky, a Russian lady who knew and had seen much, the idea sprang up of the possibility, and even the necessity, of founding a society of theosophists, of searchers for the truth in the broadest sense of the word, for the purpose of enlisting adepts of all creeds and races, of penetrating deeper into the most secret doctrines of oriental religions, of drawing Asiatics into true spiritual communion with educated foreigners in the West, of keeping up secret relations with different high priests, ascetics, magicians, and so on

Clearly Prince Ukhtomsky saw Blavatsky’s ideas as being a means to promote the Tzarsist Imperialist agenda. He believed that Madame Blavatsky wanted to unite , , , and , in order, with the involvement of , to create a grand Eurasian power able to oppose British ambitions. Traveling across India Blavatsky was often in conflict with the  British colonial authorities and found herself accused of being a Russian spy.

Prince Ukhtomsky saw support for in the "readiness of the Indians to group themselves under the banner of the strange northern woman." He believed

Madame Blavatsky had been forced to leave by "the suspiciousness of the English."

As early as 1887 H.P. Blavatsky had become a topic of debate in "mystic Petersburg" and received the prestigious support of Ukhtomsky's friend the mysterious Tibetan Dr. Badmaev, soon to become notorious for the favour he received at the Russian imperial court and his relationship with Rasputin.

Madame Blavatsky's sister insisted that the Russian Orthodox Metropolitan of Kiev had recognised the young 's psychic gift, and admonished her to use her powers with discretion, as he felt sure they were given her for some higher purpose.

Dr. Stephan A. Hoeller, a scholar of comparative religion and a Gnostic Bishop, reminds us that H P Blavatsky, was a true daughter of Mother Russia. Some feel that her life and character correspond strongly to the archetype of the traditional Russian wandering holy person, known as the staretz (literally ‘old one'),

denoting a wandering, non-clerical ascetic, or pilgrim, who travels about the countryside, exhorting people concerning spiritual matters, sometimes in a decidedly unorthodox manner.

For more info on