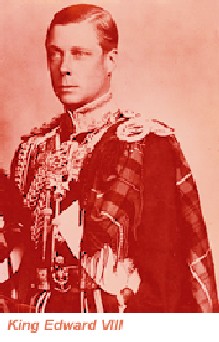 President of The Cardiff Lodge Miss Elizabeth Claudia Owen was introduced to King Edward VIII during his famous visit to South Wales in November 1936 during which he irritated Stanley Baldwin’s government by telling a large crowd in Dowlais that “something must be done about unemployment”. This was one month before the abdication.

Miss Owen joined the Theosophical Society in 1915 and was a very active Theosophist, holding many official positions within the Society between 1920 and 1960 including both Cardiff and Dewi Sant Lodge President and General Secretary after Peter Freeman left the post on becoming an MP in 1945. She was a high ranking civil servant in the Ministry of Labour and was awarded an MBE in 1928.

Miss Owen’s meeting with the King did much to raise the profile of the Theosophical Society and at the time was a source of pride to members. However the meeting later became an embarrassment to Welsh Theosophists.

At the time of his visit to , King Edward VIII was riding high as a popular figure and his comments on unemployment increased his popularity with working people. General Secretary, Peter Freeman and many other Theosophists thoroughly approved of the new King’s expressed concern over social conditions. 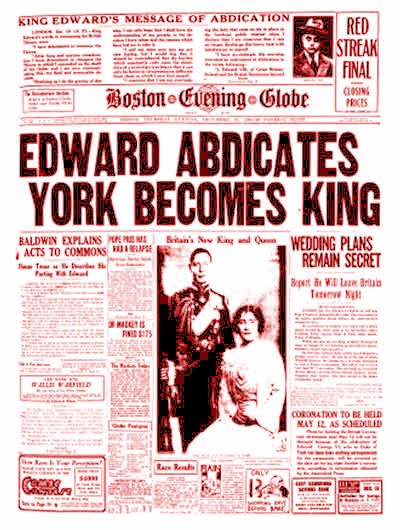 The Abdication was headline news around the world

In December 1936, Edward VIII abdicated from the throne over his decision to marry American divorcee, Mrs Wallace Simpson. He then took the title of Duke of and married Mrs Simpson in in June 1937. 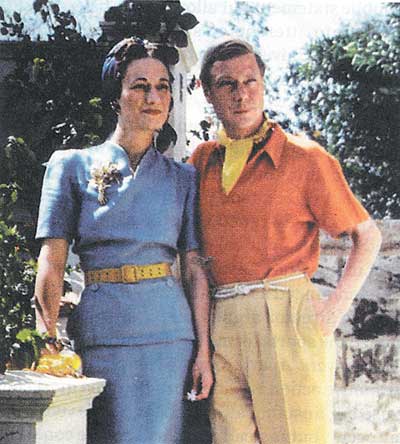 Up to this time the Duke of Windsor’s popularity in Welsh Theosophical Circles remained high and a glowing account of the meeting with Miss Owen was given in the 1937 TS in Wales Annual Report.

This changed, when on , The Duke and Duchess of arrived in to meet Hitler. The occasion was something approaching a state visit and the Duke’s sympathies with the Nazi regime became apparent.

The Duke of ’s popularity fell drastically in after this visit and never recovered. His meeting with Miss Owen was now something that Welsh Theosophists did not want to promote. Only one copy of the 1937 TS in Annual Report now survives and this has the report on the meeting with Edward VIII cut out. 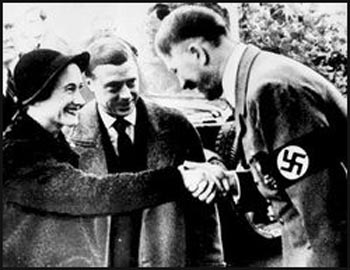 The Duke of Windsor and Wallace Simpson meet Hitler in October 1937.

The Terraced Maze of Glastonbury Tor

Glastonbury and Joseph of Arimathea

The Grave of King Arthur & Guinevere

Tekels Park to be Sold to a Developer

Concerns are raised about the fate of the wildlife as

Surrey, England is to be sold to a developer

Magnificent Tekels Park to be Sold to a Developer