History of the Theosophy in

The Tape Recorder Saga of 1956 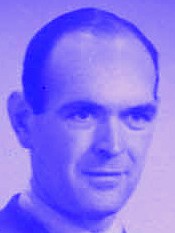 Interest in a tape recorder probably began in 1954 when John Whitting of brought his own equipment to a Lodge meeting at to play a recording of a Geoffrey Hodson lecture. It is described in subsequent Lodge records as “a marked success” and “a welcome innovation to our programme”

Charles James, recalling this momentous event in the 1990s, said that the Tape Recorder was carried from the car into the building with great caution by four able bodied members and that many of those present had never seen a Tape Recorder before.

It is recorded in the National Council Meeting minutes of that Charles James gave a report on the costs of either hiring or buying a tape recorder to record lectures or play those of absent speakers.

(Please note we are talking about a reel to reel machine, audio cassettes didn’t come in until about 1967)

His findings were as follows:-

The matter was discussed at this and a later meeting on November 2nd and it was decided to delay the decision to purchase a machine. Charles was thanked for his effort.

It appears that a tape recorder was hired for one meeting only in 1957 at a cost of 1 guinea.