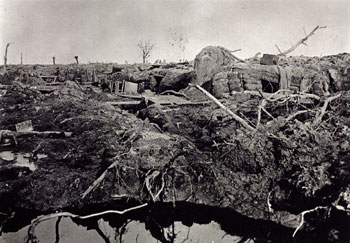 The Western Front at Passchendaele 1917

The of Passchendaele (also known as the Third

By 1914, the clouds of opposition to the Society began to clear, and its work developed harmoniously in each National Society. In August this year, the Great War began, and Mrs Besant took a definite stand on behalf of the Allies. This was naturally misunderstood and resented by many members, who belonged to the countries which were in opposition to the Allies. In each country involved in the War, members of the Society did their utmost with all their fellow citizens to serve their country to the best of their ability. Necessarily owing to war measures, no communication was possible between the Headquarters at Adyar and the members of Lodges in countries at war with the Allies; the National Societies in the “enemy countries” had to be officially treated as I they were no longer part of the T.S. As soon, however, as peace was declared, and the war regulations regarding communication with enemy countries were abolished, the old bond was resumed, and all National Societies became once again one unted organization under one president. The first larege meeting of Theosophists after the War, was in in July 1921 at the First World Congress of the Society.