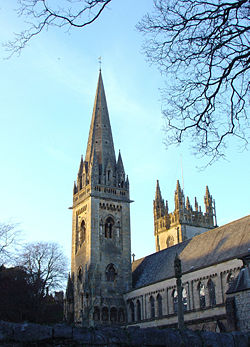 Llandaff Cathedral is the seat of the Bishop of Llandaff (of the Church in ), situated in the suburb of Llandaff in the city of , the capital of . It is dedicated to Saint Peter and , and also to three Welsh saints: Dyfrig, Teilo and Euddogwy.

There is evidence for Celtic Christian worship on the site the cathedral from the 6th century and the original church is said to have been built by Saint Teilo on the bank of the River Taff in 560. After his death, his shrine became a place of pilgrimage. The monastic settlement survived for many centuries before the establishment of the diocese of Llandaff at some point shortly after 1020.

The occupied Glamorgan early, and appointed Urban their first bishop in 1107. He began construction of the cathedral in 1120 and had the remains of Saint Dyfrig transferred from Bardsey, but the work was not completed until 1290. The west front dates from 1220, and contains a statue of Teilo. Bishop Henry de Abergavenny gave the cathedral its statutes. The Lady Chapel was built by William de Braose, who was bishop from 1266 to 1287.

Damage was done to the church in 1400, during the rebellion of Owain Glyndŵr, and his forces destroyed the Bishop's Palace at Llandaff. However, most of the other damage was repaired notably by Bishop Marshall whose reredos partly survives, and the north-east tower (the one without a spire) was added by Jasper Tudor, and is now named after him. He assumed the lordship of after the accession to the throne of his nephew, King Henry VII of . Late medieval tombs include that of Sir David Mathew.

During the English Civil War, the cathedral was overrun by Parliamentarian troops, and by 1720 the southwest tower was in a state of collapse. In 1734, work began on a new cathedral, nicknamed the "", which was used for a hundred years but never completed and of which only a few stones remain.

During the 19th century, when the Bishop of Llandaff began, for the first time for centuries, to reside in Llandaff, the cathedral was extensively restored, the tower rebuilt and a spire added. A triptych by Dante Gabriel Rossetti was designed for use as a reredos, and new stained glass windows were designed by Sir Edward Burne-Jones and Ford Madox Brown.

The cathedral school which existed from the time of the Elizabethan Bishop Blethyn until about 1700 was re-established by Dean Vaughan in 1880.

On the evening of during World War II a German bomb fell beside the cathedral, causing massive destruction including that of the organ. Of British cathedrals, only Cathedral was damaged more.

Major restorations and reconfigurations were carried out under architect George Pace of , and the building was back in use in June 1958.

The Queen attended a service celebrating the completion of the restoration on August 6, 1960. The Welch Regiment memorial chapel was constructed, and Sir Jacob Epstein created the figure of Christ in Majesty which is suspended above the nave on a concrete arch designed by George Pace.

In February 2007 the cathedral suffered a severe lightning strike. Particular damage was caused to the electrics of the organ, which was already in poor condition. This prompted the launch, on (the 50th anniversary of the re-hallowing of the nave following the wartime damage), of an appeal to raise £1.5 million for the construction of an entirely new organ.

The cathedral has the traditional Anglican choir of boys and men, with the only dedicated choir school in the Church in . In addition, the parish choir sings at the weekly Parish Eucharist, and is a mixed choir.

and the Celtic Tradition